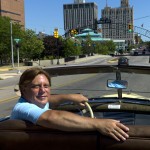 , has been CEO of GFAC for 29 years. Greg has 44 years of experience incorporate management and administration, 36 years of experience
in non-profit management, and has been a performing artist for 57 years. He holds a BA from the University of Michigan, Ann Arbor. His experience includes Chairman of the Board (CEO) for Flint Community Players (6 years); President of West Flint Kiwanis; founding member, and current Board of Trustees member of the Uptown Redevelopment
Corporation. In 2018, he played an integral role in the passing of the Genesee County Millage to support arts and cultural agencies in Genesee County. In addition, supporting the arts and culture in our area, Greg engages at a higher level. He was District Captain for Americans for the Arts Advocacy Day (8 years), assigned to Congressman Dale Kildee. He has served as a presenter at Americans for the Arts Convention at Pittsburg, PA, and at AFTA Marketing Convention in Louisville, KY to share our Parade of Festivals program as a national model for collaborative marketing. Greg’s leadership in our community has helped other arts organizations grow through collaboration, support, and partnering. He has raised funds for more than three dozen non-profit organizations. Greg is deeply devoted to the city of Flint, where he has lived all his life, except while attending the University of Michigan-Ann Arbor where he completed a BA with a major concentration in Psychology and minor concentrations in Theater (Professional Theater Program) and Sociology.

Tanya Lane, Development Director, has more than 25 years of experience in development, event planning, and marketing. She was previously at Sloan*Longway where she developed the membership program. Prior to Sloan*Longway, she was at the Flint Area Convention & Visitors Bureau where she was the Executive Director for Back to the Bricks and Bikes on the Bricks. She has also worked at Fair Winds Girl Scout Council and the Flint Institute of Arts. Tanya earned her Bachelor of Journalism degree from the University of Missouri and is a life-long resident of Flint.

Harold Hill, Operations Manager, has made the arts his third career, having already retired twice, once as a non-profit Economic Development Director and again as a high school educator. He has been with GFAC for 9 years and is responsible for volunteers, interns and all technical aspects of GFAC programs, events and use of our facility. Harold is currently treasurer for the national board for his fraternity. He is also a licensed realtor.

Suzanne Lossing, Regranting Coordinator, has managed regranting programs for GFAC for the past 9 years. Suzanne worked in development at Mott Community College for 28 years and completed her Masters in Arts Administration from the University of Michigan-Flint in 2016. Suzanne is a visual artist specializing in cast glass. She teaches art in the Flint Public Schools full time serving as their Makerspace Specialist, Team
Leader for Place Based Education, and Advisor for Robotics and Young Entrepreneurs. Suzanne has received awards and nominations for her work from both Mott Community College (Golden Apple Award, Paul Karr Cup Award, Advisor of the Year) and Flint Schools (Excellence in Education multiple nominee; Priority Children Champion Award
nominee). In 2021 she was awarded the “Innovation Award” by the Education Foundation for Flint Community Schools for her efforts on Placed Based Education at Flint Southwestern. She has also received prestige for her artwork “Swimming” at ArtPrize; and “Inside/Out” Best in 3D at the “Crossing the Straits” ArtPrize juried show.

Jerin Sage, Director of Placemaking, has been a program partner with GFAC since 2010. He has a history of successful planning and coordination within the community. He is the Founder & CEO of Peace Mob Media Productions which is popular for the Flint Drop Fest, Bring It Fest, and Free City Public Art Fest. In addition to providing downtown Flint with a meriad of placemaking engagements, Jerin is leading the 2022 Americans for the Arts Economic Impact Study (AEP 6) for Genesee County.

Brendan Whitman, WFAH Public Radio Program Coordinator, began as an intern from
Mott Community College. Upon completion of his Associates Degree in TV and Radio Production, he was given a permanent position at GFAC. He has added 5 new programs to the roster and taken the station international through live streaming.

It is the policy of the Greater Flint Arts Council to provide equal employment opportunity to all employees and applicants for employment. No person shall be discriminated against in employment because of gender (including pregnancy), gender identification (an individual’s internal sense of one’s own gender), sexual orientation (determined by whom an individual is sexually attracted to and also has the potential for loving), race, color, ethnic or religious background, descent or nationality, disability (including past, present, or future physical, intellectual or psychiatric disability, learning disorders or disease – for example, HIV), marital status, age, height or weight.

This policy applies to all terms, conditions, and privileges of employment, placement, transfers, internal promotions, training, opportunities for advancement, terminations, compensation and benefits, relationships with outside vendors and customers, use of contractors and consultants and in dealing with the general public.

It is the responsibility of all Greater Flint Arts Council employees to contribute to the Council’s equal employment opportunity work environment. If you have any questions about this policy or its application, please contact the President/CEO.

The Greater Flint Arts Council complies with all Federal and Michigan laws prohibiting discrimination on the basis of handicap or disability. The law requires employers to make reasonable accommodations to handicapped applicants and employees where the accommodation does not impose an undue hardship on the employer.

For information about arts and cultural events and sports events go to geneseefun.com! Please tell your friends. Word of mouth is still at the top of advertising statistics.

Volunteer at the GFAC

Thanks to our great volunteers, each year we are able to produce five outstanding festivals during the summer months and 12 wonderful gallery Artwalk openings during the 2nd Friday Artwalk. Interested in volunteering? Contact Harold Hill, Operations Manager, at harold@greaterflintartscouncil.org or call all 810.238.2787 for more information.

Donate to the GFAC